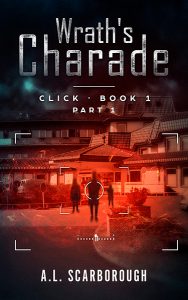 In March the first part of book 1 for CLICK will be released but until then I will need a band of hearty readers who like to read Urban Fantasy Thriller books.

The recommended age for this series is 17+ years due to the adult situations, foul language, and sexual content that is not appropriate for anyone under the age of 17.

You have been warned.
Only the mature, brave of heart, dark & twisted and demons beyond this point.

I fight demons. I save lives. I’m literally a force for good holding back the gates of Hell.
My name is Sarah Kinsley and I take crime scene photos for the local police department of New London.

It has been nearly a year ago since I’ve bought this enchanted film camera from the local pawnshop and caught my first demon, Seth, a djinn. During our game of cat and mouse, he found out the one thing that I hated more than demons… glitter. From that point on every creature that went bump in the night uses glitter against me to get away.

To make matters worse these creatures now take on unassuming forms such as children so that you never know who the bad guys are anymore.

Whatever happened to the good ole days when demons took the form of sleazy old men or weirdos in overcoats and were essentially glitter free?

So, when I’ve been brought on a case that reeks of demon meddling, where mothers are found dead due to freak accidents, I do my best to find and capture it with my camera before it can do any more harm. But where there’s more than one child possession that spreads like a virus, there’s a stronger more powerful demon behind it. Will the camera be able to capture this demon? Or will the children within this town succumb to demonic possession?